Hydroxychloroquine and scientific integrity of studies

So what is the motive behind presenting false and inaccurate data on the use of Hydroxychloroquine? Is Trump Derangement Syndrome (TDS) so epic that researchers would endanger the lives of millions in an attempt to falsely prove a certain individual wrong? The medical journal, The Lancet, which originally published the report has this damning statement in their retraction concerning the study " The Lancet takes issues of scientific integrity extremely seriously, and there are many outstanding questions about Surgisphere and the data that were allegedly included in this study."

It is disgusting the lengths people will travel on their journey of hatred toward the President. No lives matter to them, their psychosis rules their lives and actions 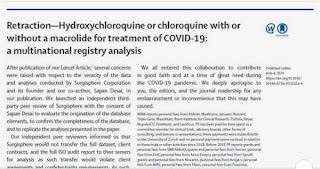 Posted by Ron Peacock at 9:30 AM No comments: