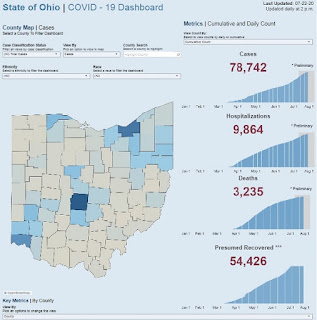 “There are three kinds of lies: lies, damned lies, and statistics.”

In events that can only be described as calculatingly contrived, maliciously manipulated and deviously deceptive, The Pavo News has learned the misleading manner in which the state of Ohio is reporting COVID-19 numbers.

As we attempt to dig deeper into this apparent manipulation and governmental malfeasance, let me offer a brief explanation of the situation.

The State of Ohio produces two sets of numbers for ‘Cases’, ‘Hospitalizations’, ‘Deaths’, ‘Presumed Recovered’ and ‘ICU Admissions’ one set being the ‘Total Reported’ (this is what is reported to the media) and the other being the real, actual and factual ‘Daily Count’. Here is where the difference is significant and extreme.

For example: On July 21, 2020 Ohio officially reported a case increase of 1,047 new cases when the actual new cases reported on that day were 246. Why are there an extra 801 cases that were reported as having occurred on that given day? The answer lies within the way the State documents cases and also reveals the way the numbers are being manipulated to increase panic, and by doing so, allow our ‘Yoda’ look-alike Governor to implement his pet draconian mandate ... mandatory face masks.

Anyway, let’s get back to July 21st.  There where only 246 actual new cases for the ‘Daily Count’ but there were an extra 801 cases included in the ‘Total Reported Cases’ on that date. From where did these 801 cases derive? They come from past cases, that could go back as far as 7 months ago in January, which the State has just now cataloged from state backlogs ... in a word, misinformation!

So citizens of Ohio (and many other States) you are being played like a cheap fiddle. Throughout the whole of the State there has not been one single “journalist” (or even elected official(s)) willing to perform their due diligence and investigate and/or report on this matter.