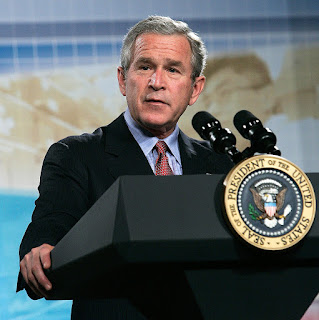 
It was the early 2000’s when President George W. Bush, a much maligned and hated representative of the people by those on the far left, warned of impending crises looming in America’s near future. In the case of one crisis he was ignored mostly by Democrats who vociferously denied the existence of the problem, if not making boldface statements of the opposite conclusion and denying the Presidents warnings. In the other instance, President Bush proposed a detailed, comprehensive program to defend America in light of this coming American crisis. It has now been proven that President Bush was more than far sighted in his dire warnings of these few events which we now know eventually came to pass; President Bush had the vision to see beyond the first row of seats ... he was prescient!

Of course, one of those events was the collapse of Fannie Mae and Freddie Mac (which we will not discuss here) and the ultimate banking crisis that almost destroyed the United States, as well as other world nations. The other was the impending threat of a deadly pandemic. In a world of politics and myopic, short sighted vision, where most elected officials can only see as far as the next election, President Bush genuinely cared for the health and citizenry of this nation ... and he was prescient!

Alas, as with all things political, there was corruption, back door deals, deception, broken promises, lies and outright thievery amongst the State players involved. Such remains the norm when you have an uneducated, low-information, US electorate. Those who care more about the details of some Kardashian’s life as opposed having any knowledge of their country and the life blood that once made this nation great, while continuing to vote into office the same charlatans that have hoodwinked them for decades ... if not centuries in some cases ... they are not prescient!

In the end, President Bush could not sustain his program. Many States took the money allocated for these important preparations and reallocated to pet projects, businesses of family, friends and staunch financial supporters within their State (not unlike the actions of Governor Cuomo in 2015 when presented with the reports and recommendations of national and State health officials which stated New York was sorely unprepared and in need of immediate attention for the inevitable unfolding crisis ... instead Cuomo squandered the money which resulted in the unprecedented death of New Yorker's from the COVID-19 virus) , others were disinterested with the work this would encompass and yet others plain didn’t care. These politicians are now the rabble attempting to present the solutions to the very problems they created ... what a laugh ... yet the "sheeple" respond to these obvious scheming actions. No matter to me, I have long ago given up on America, as of 2009 ... because I am prescient!

And as a passing comment I’d like to present a thought growing and burning in my heart, as well as millions of other Americans who understand the nature of our system of a Federalist, Constitutional Republic government, and that is: It may be time to refresh the ‘tree of liberty’ ... it thirsts for nourishment, life's natural manure, our natural fertilizer consisting of the blood of political tyrants that are attempting to overlord the people, and just as well, those of us patriots willing to sacrifice for the righteous and just cause of liberty, freedom and human dignity ... perhaps this will prove to be prescient!

Posted by Ron Peacock at 8:45 PM No comments:

In Ohio We the People Win

Ohioans have taken back some control from America’s newest authoritarian tyrants (State Governors) and forced Governor Mike DeWine (R-OH) to stand down from his unconstitutional State mandate that all customers MUST wear some form of mask to be allowed into retail business going forward into Ohio’s reopening of the economy.


In a State order reminiscent of the force used by leftist such as Mao Tse-Tung, Pol Pot and Vladimir Lenin, the Governor was forced to back off his despotic decree that "no mask, no work, no service, no exception." would be the law of the land. The people loudly voiced their opposition to such a draconian, dictatorial ultimatum and DeWine was forced to abandon this unlawful sanction.

Here is an article mentioning the Governors reversal:

Posted by Ron Peacock at 3:32 PM No comments: 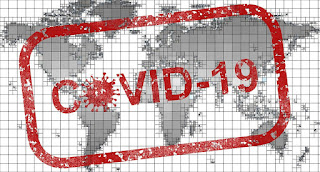 Ever so slowly I am beginning to take on a new outlook concerning the former ‘Chinese Wuhan Virus’, now commonly referred to as the COVID-19 pandemic, and realizing the experts are nearly as clueless as the public. Please note, I am not singling out any specific “experts” rather, the overwhelming, conflicting and often contrarian recommendations and conclusions from health “experts” world wide.

But first I must include one exception and that is the World Health Organization (WHO) led by Ethiopian Dr. Tedros Adhanom Ghebreyesus who is widely known to have been in collusion, direct involvement, bribery and criminally corrupt activities while collaborating with his Chinese benefactors during a major crisis in his own homeland. Apparently, all this qualified this despicable man as the most notable candidate for appointment as Director General of the World Health Organization. His public statements, refusal to address China’s irresponsible behavior, the apparent cover up he is orchestrating while being masterfully manipulated by the strings of Beijing, who are obviously controlling the doctors actions, demand his immediate dismissal, a swift independent investigation which will result in criminal and human rights violations brought before The Hague.

The WHO’s unscrupulousness Ethiopian Director General aside, let us delve into three important factors seemingly agreed upon by most of the worlds medical inteligencia:

1.) The outlook for an effective vaccination is as much as 15 months away.

2.) Testing capable of speedy and immediate administration for the 7.7+ Billion residents of planet earth may not be a possibility for many months to come ... if not longer.

3.) So far, the consensus has been determined that a more than vast population of peoples exposed to the virus, and have survived, manufacture the appropriate antibodies which render them immune to this current strain of COVID-19. As well, it appears that a great majority of the population are asymptomatic or only experience mild to medium flu-like symptoms during the course of their illness.

Now let us review the reaction of the entire world during this event in which a mere 0.00138 percent of the entire population (7.777 Billion) have died due to the virus. Don’t read this wrong, every life is precious to someone, this analysis requires the absence of emotional hysteria and panic and requires us to look coldly at mathematical data. In this case, we have literally crippled the world and the detrimental results will ripple through many societies for years to come.

First let us review the pandemic of pandemics, the 1918-19 influenza outbreak which claimed the lives of as many as 50 million people in a world wide population of approximately 1.7 Billion souls. This puts the death rate at 2.49 percent of the world population, approximately 2,000 times more deadly than COVID-19.

In 2009 the H1N1 Swine flu (another pathogen passed onto the world by our Red Chinese neighbors) claimed approximately 423,700 lives world wide with an unusually high number of victims being children. At the time, the world population was 6.85 Billion making the death rate 0.00618 percent of that world population and 3.9 times more deadly than COVID-19. What was our response? Well, we did not cripple the economies of the world. Life went on, people died and we finally found a vaccine approximately 7 months after the first infections where noted in Shanghai, China

Lastly, just for shear numbers, let us review the normal seasonal death rate of influenza world wide. The World Health Organization reports that influenza kills 650,000 victims per year. As of 2019, the mass of humanity was 7.57 Billion. This equates to a world population death percentage of 0.00858  which makes it 5.42 times more deadly than the COVID-19 virus.

So, without an effective vaccine, there is one way, and only one way, to defeat this virus and end the madness we are experiencing:

Certainly people will die ... and I may be one of those victims ... but the world economy cannot collapse. Lives must be sacrificed and we must build an immunity for the majority of the world population now or we will be experiencing these out breaks and world economy shutdowns until the vaccine is ready, possible as far away as July 15th 2021, according to “experts”.

We must follow the example of South Korea and quarantine the susceptible elements of society that are at risk of serious effects and let the rest of the population continue to put our economies, societies and lifestyles back in order.

Herd immunity is the ONLY logical answer at this time and with the present knowledge that is available, let it happen!

We must not destroy all we have achieved, for multiple generations, for the sake of a few hundred thousand people. There are 7.777 Billion of individuals (and counting) that depend upon a functioning social infrastructure. The lives of the few, the weakest amongst us, must be sacrificed for the lives of the many.

If this absurdity continues, more people will suffer and die going forward due to our economic destruction than this virus will ever claim!!!!!

Reclaim your civil rights, your Constitutionally guaranteed protections which we so easily relinquished and take hold of our societies sanity from the hands of bureaucrats (many unelected) destine to use this event to limit our liberties in the near future. Keep in mind the results of the oppressive ‘Patriots Act’ that was intended to be temporary and now has become permanently instilled in our legal system. Reject your role as the sheeple and think ahead, not in the moment!!!!