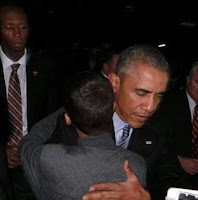 After completing his “false flag”, trial run mission, little Islamist Ahmed the “clock maker” is returning to the lands of Mohammed (curses be upon him).  The announcement was made just 24 hours after Ahmed met with Barrack Hussein Obama, at which time he may have received new marching orders from our President.  Ahmed and his family have accepted the grateful invitation from the Sharia paradise of Qatar (rhymes with gutter, and for good reason) in order that he may continue his world renowned and unprecedented research into disassembling and reassembling antiquated digital clocks.  Inside sources, who refused to be identified, have revealed the Qatar Foundation for Education, Science and Community Development are interested in enrolling little Ahmed in their budding BOOT camp (Bombs Out of Obsolete Timepieces) program.


Insiders have also disclosed that Ahmed and his radicalized father, Mohamed Al Hassan (aka Mohamed Elhassan Mohamed), were at first reluctant to make the move until the Qatar government guaranteed little Amhed all the “pet” goats a Muslim boy could desire while offering his father an endless supply of imported Bacha bazi boys.  Ahmed’s Mother was unavailable for comment since she is no longer allowed to speak or be seen in public.


We bid thee adieu, little Ahmed.  You will be missed by a treasure trove of self-loathing American dupes.  May the wind always blow at the back of your camel and the laser sights of a AGM-114 Hellfire missile be "painted" on yours.
Posted by Ron Peacock at 3:05 AM No comments:

Ancient Ruins, an Apologist and a Bathhouse 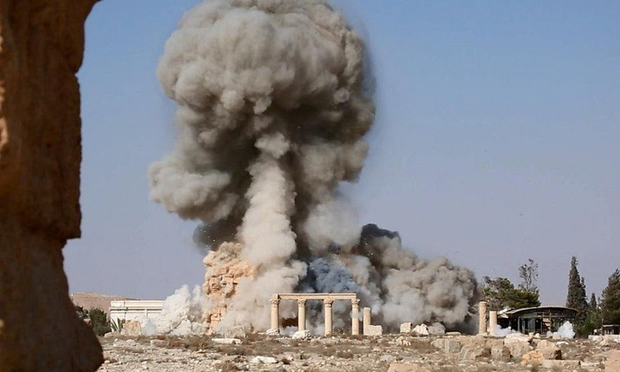 The moment of destruction -- Temple of Baal Shamin in the Syrian city of Palmyra
Ron Peacock
S.U.C.C.S., OH (PN)


As our impotent President, Barack Hussein Obama, stood idle, the “junior varsity team” (the Islamic State a.k.a. IS, ISIS or ISIL) has destroyed much of the ancient Semitic city of Palmyra.  From May of this year, until just days ago, these barbaric throwbacks of the “religion of peace” have been left unchallenged and unmolested to wantonly destroy this great ancient architectural achievement and UNESCO World Heritage Site.  As would be expected, the United Nations and the major world leaders decisively gathered some paper, rattled their pens, issued a scathing condemnation and are now awaiting the Islamic States withdrawal in the face of such a strong, united and purposeful reaction.

Though the destruction of Palmyra by IS is irreversible and permanent, it should be worth noting that the Islamic States existence may not share the same fortune. Enter Vladimir Putin, a man of determination, strength, pride and sense of honor for his country. In short, a man of action to be reckoned with.

It appears, the virtuous responsibility of eradicating IS has been taken up by Vladimir Putin and the mighty Russian military which has accomplished more in two days than the leadership of Barack Hussein Obama (our purported Commander-in-chief) managed in over a year. In light of the anemic response of our seemingly Islamic apologist President, I find myself in the decidedly distasteful position of supporting Russia’s actions. The United States military command has been weakened and “fundamentally transformed” by Obama. He has purged our military of our most experienced and loyal generals and replaced them with “men” plainly more comfortable in a San Francisco bathhouse than a command and control center. Our military is now seen as ineffectual and lacking competent leadership. What was, not too long ago, the most powerful force for good the world has ever known, The United States, is now perceived as a paper tiger, an unfaithful ally and the butt of jokes worldwide.

As I wish continued success for the Russian and Syrian armies, I will continually remind myself that this Nobel Peace Prize winning President, along with his dubious (if not criminal) Secretary of State, orchestrated the so called ‘Arab Spring’ -- thereby setting the middle east ablaze and paving the way for the Islamic States conquests. In this fact will my discomfort, in support for Russia, be mitigated.

Posted by Ron Peacock at 9:07 PM No comments: