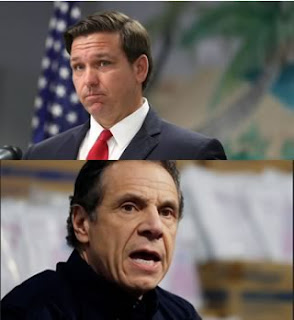 The Tale of Two States

Without going into the finer details of the gross mismanagement and nonsensical, misguided, dangerous decisions on the part of New York State and New York City in response to the COVID-19 pandemic, let us look at some numbers from two comparative states, Florida under the leadership of Governor Ron DeSantis (R-FL) and New York State under Governor Cuomo (D-NY) during this same crisis.

As you can see, these States are relatively as close as you can get to being equal in these categories.

Draw your own conclusions. It is time for people to think for themselves ... if that possibility even exists!!!!