The True Culprits of Kenosha

The True Culprits of Kenosha

'Rioters, Leaders and the Media' 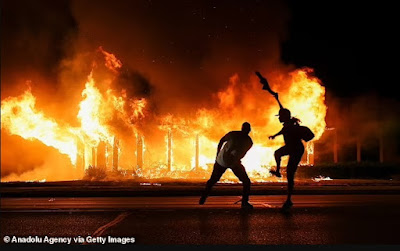 Now that the fires have waned, the ashes settled and the dust cleared, the most essential lessons to be learned from the Kenosha, WI riots were lost and overshadowed by a solitary incident where a victim was compelled to use deadly force in order to preserve his life.

No matter what our collective opinions concerning Kyle Rittenhouse, the legal aspects of the case have now been adjudicated. Both surviving participants, Rittenhouse and Gaige Grosskreutz, lives have been changed going forward ... hopefully for the best, in both instances.

Lost in the morass of public attention, we have overlooked the essential lessons and true culprits.

First and foremost were the rioters. Violence and destruction should never be tolerated in a civil society. And when a group uses these means to their ideological end, they are terrorist ... thugs at best. Hopefully, regardless of ideology, future individuals contemplating madness and mayhem, have learned these actions never end well and they accomplish absolutely nothing ... if not the opposite of the stated intent.

The next culprits are the leaders of the community and the State who are charged, and sworn by oath, to uphold law and order while protecting the safety, lives and property of their constituents. In Wisconsin, these leaders failed on an epic level. We can only hope they, and the rest of the country, learned a valued lesson.

And finally we come to the media. Perhaps the most notorious of the culprits since they cannot be held to accountability in the same manner as individuals and elected officials. From the very inception of the riots, too many media entities practiced deceit, obfuscation and outright fabrications concerning the events leading to the defensive actions of Rittenhouse and the subsequent chaos. It is a blessing (and an irony) that the media broadcast the entirety of the trial, where we learned first hand of their journalistic malpractice. Will any of the alleged “journalist” and media outlets, complicit in these staggering acts of malfeasance, learn a lesson? Perhaps not.  But the public needs to take note. The curtain has been pulled back and revealed the extensive rot and putrefaction of our once trusted media.